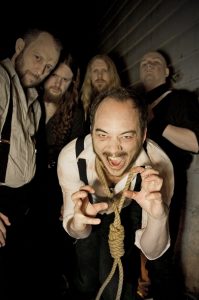 The band rises from the ashes of the Goth band Dead Rose Garden and establishes the definitive line-up that is today’s Vulture Industries. Two critically acclaimed albums are released: «Dystopia Journals» and «The Malefactor’s Bloody Register». Extensive touring follows, all the while improving the band’s stagecraft and forging a reputation as a theatrical and hugely entertaining live act.

The release of «The Tower» in 2013 demonstrates the wide appeal of Vulture Industries, and collaborations with various artists expands the band’s audience. After much touring, and the garnering of considerable praise from press and fans alike, the long wait for the 4th album is almost over. The Fall of 2017 will see the new album, TBA, hit the streets, backed by a heavy touring schedule.

2003: The remaining members of the Goth band Dead Rose Garden – Tor Helge Gjengedal (drums), Øyvind Madsen (guitars), Kenneth (keyboards) and Even (bass), team up with Bjørnar Erevik Nilsen (vocals and programming) and record the songs that will later be unofficially released as the EP «The Sleeper», which comprises the tracks «The Sleeper», «The City in the Sea» and «The Demon and the Fool».

2004, March: The emerging band makes its first live appearance at the Piggtraadfestivalen in Hulen, Bergen. Even leaves the band and is replaced by Eivind Huse (guitars) and the last piece of the puzzle,  Kyrre Teigen (bass) joins the lineup. The gothic elements from DRG give way to a more Metal approach (Black/Doom) with an Industrial/Avant-garde twist. The new line-up performs for the first time under the name of Vulture Industries and shortly after they record their first demo  «The Enemy Within». The release quickly gains the interest of the boys (later known as the band Leprous) who are arranging the Motstøyfestivalen in Notodden, Norway and Vulture Industries becomes part of the great lineup.

2005-2007: The band goes into rehearsal and recording mode, emerging only to hone their live performances and fine-tuning their material for the upcoming demo, ahead of the first full length release «Dystopia Journals». The rising band catches the attention of Dark Essence/Karisma Records and by October 2007 the first CD is on the shelves. Receiving widespread acclaim,» Dystopia Journals» is regarded by the band as a natural progression away  from their previous influences towards a new musical direction which reflects the wide spectrum of inspirations that colour the Vulture Industries palette.

The songs on «Dystopia Journals» are a combination of tracks from «The Enemy Within» and «The Benevolent Pawn» EPs,  plus new songs that showed the band’s new direction.  Also included on the CD is a hidden track, which will later appear officially on the vinyl version. This hidden track, “Ende”, was a reflection, at the time of recording, of the inspiration drawn mainly from Prog bands like Camel and Anekdoten. The track didn’t fit with the rest of the songs on the album, hence the reason for it being hidden.  Many reviewers and fans compared «Dystopia Journals» to the pioneer Avant-garde Metallers Arcturus, and this inevitably led to the two bands joining forces to tour later down the line.

2008: The release of «Dystopia Journals» is followed by extensive touring for Vulture Industries, with the band teaming up up with Norwegian viking metallers Helheim and German Black Metallers Dark Fortress for  a European tour in March of that year, which includes ten appearances in Germany, England, The Netherlands and Switzerland. This is also where Vulture Industries first crosses paths with Edmond and Jimmy from the Romanian Folk/Black Metal band Negura Bunget, at Festung in Bitterfeld, Germany. There follows a short Norwegian tour with Helheim and Norwegian Black Metallers Cor Scorpii.  In November the 2008 «Dystopia» touring cycle comes to an end with a joint nine date tour, again with Helheim and with Norwegian Avant-garde Metallers Atrox, through Germany, the Czech Republic, Slovakia, Poland and the Netherlands.

2009: Marks the final tour with material from the first release along with Helheim, this time with Norwegian black metallers Taake as headliners, for a five days tour of England, Ireland, Scotland.

2010: The band goes into demo and recording mode, preparing for the release of their sophomore album. Before recording started it was felt that the new songs would reflect more of the progressive bands VI were inspired by, but an extensive period of recording resulted in the layering of tracks, and, ultimately, the most metal/heavier sounding album from the band so far.  A tour follows,  once again with Helheim and Taake, this time also bringing along Øyvind Madsen’s Black Metal side project, Sulphur. The tour includes eleven venues in France, Italy, Serbia, Romania, Slovakia, Slovenia, the Czech Republic and Germany. Before heading off on the tour, the band makes its first festival appearance in Romania, at Labyrinthic Metal Evening, in Bucharest. Vulture Industries’ performance has come to be regarded as legendary, and makes the band a name in Romania and paves the way for many later appearances.

Late 2010 and early 2011: Vulture Industries is the opening act for the Norwegian Gothic/Death/Doom Metal band Tristania for a few shows in Norway,  before setting off for a five days’ Mini Tour with Taake, in Germany, Netherlands and France, finishing with a show with Negura Bunget (which now has split from Edmond and Jimmy) and with the Norwegian progressive black metallers Enslaved, as a grand finale. During the summer of 2011 the band makes its first appearances at a number of festivals – Metal Camp in Slovenia, Dong Open Air in Neukirchen-Vluyn, Germany,  Metal BBQ at Azijnfabriek in Roermond, the Netherlands, and once more at the follow-up festival from the Labyrinthic Metal Evening, which is now called the Dark Bombastic Evening, and takes place at the fantastic Citadel in Alba-Iulia, Romania.

2012 starts off with a very cold Mini Tour in Italy, Slovenia and Hungary, before the band’s debut appearances in Finland and Sweden. There rest of the year’s touring is considered a big success, starting off with the first show at Hellfest in Clisson, France,  in front of 3-4,000 people, the biggest highlight for Vulture Industries so far, followed later by the bi-annual appearance at Phantoms of Pilsen in Pilsen, the Czech Republic, also one of VI’s favourite festivals. Talks with the French/American label Season of Mist are also started. In December the band tours for the first time with others close to their genre, as they team up with fellow Norwegians the Avant-garde Metallers Virus and the Post-Metal band Krakow, for a very successful and rewarding/inspirational tour through the Netherlands, France, England, Germany, Slovenia, Switzerland and Belgium.

2013: This will be the most exciting year so far, as the third album is finalized after three long years in the making, and «The Tower» is released in the fall. At the same time the band joins forces with multi-media artist Costin Chioreanu to create the artwork and videos for the album,  as well as receiving a grant for a joint collaboration with the performance group the Happy Gorilla Dance Company. The latter plays an important part in the shaping of the aesthetics and essence of «The Tower».

The album is a great success by itself, as is also the resulting concert version of Vulture Industries/HGDC project named «Turning Golem», which makes its debut performance at the Dark Bombastic Evening in Alba-Iulia, Romania. Later there is also a theatre version of the collaboration, with two shows at Verftet in Bergen. During 2013 and 2014 the «Turning Golem» show goes on to be performed in Bergen,  the Phantoms of Pilsen,  Le Boule Noire in Paris, France, the Headway Festival at P60  in Amstelveen, the Netherlands,  and finally at Metal Days in Tolmin, Slovenia. «The Tower» is voted Album of the Year in one of the editorial lists in Metal Sucks, one of the USA’s most important metal web sites. MetalStorm awarded the awarded the #1 Avant-garde/Experimental album of the year (staff picks) and #2 Avantgarde/Experimental album of the year (reader picks). It was also Album of the Month in Parat Magazine.

2014: This year’s touring is two-pronged, and once again VI joins up with Edmond and Jimmy and their new band DorDeDuh, for a spring tour through the Czech Republic, Slovakia, Hungary, Romania, Serbia, Greece and Slovenia. The aspiring Blutmond from Switzerland joins the bands for the first leg. The autumn leg is a small mini tour in Norway. During the summer the band performs at the fantastic Kilkim Zaibu Festival in Varnai, Lithuania and is invited to return to Dong Open Air, and to bring «Turning Golem» to Metal Days. In October the band plays a solo show at Pod Lampou in Pilsen, the Czech Republic and also appears at Norwegian Hellcamp in Schweinfurt, Germany  and at Prog Power Europe in Baarlo, the Netherlands, once again showing Vulture Industries’ versatility and its ability to fit easily into different settings.

2015: Vulture Industries starts the year with a Mini Tour of the Baltics and Finland. By chance Arcturus is playing in Helsinki, Finland on the same night as the scheduled Vulture Industries show and the band is invited to join Arcturus at Nosturi. This is a great success, and the seed has been sown for a future collaborations, and, as soon as May of the same year, the bands team up for an 8 day tour through Italy, France, Belgium, England and the Netherlands. Krakow,  and Norwegian prog/jazz rockers Seven Impale,  join the tour. During Easter Vulture Industries appears at the Inferno Festival at the Kulturhuset, Oslo, which is the first of two performances of «The Babylon Spiral Show» with Costin Chioreanu as both performing artist and stage designer. There follows two Spanish dates in Barcelona and Madrid with  Swedish Prog Rockers Soen. The Rockstadt Extreme Fest in Rasnov, Romania marks the last appearance outside Norway for this year as the band begins to  focus on recording the new album. The preliminary plan is to start recording before end of 2015, but things are delayed. History will show that the band is once more undertaking very thorough and time consuming preparations, and recording is postponed,  with final rehearsals and recording anticipated to take place during the spring 2016.

2016: As recording plans fail to materialise, the band decides to do a final tour with The Tower material. Sulphur comes on board “The Tower Falls Tour”,  which rolls through the Czech Republic, Germany, Hungary and Romania. During this tour the idea for a collaboration with Edmund from DorDeDuh in respect of the recording process comes about, and a start date for recording is finally set. Most of the tracking is done by Christmas, but a lot of work still remained for the start of 2017.